Created by the Ancients, Azel was excavated and awoken from hibernation by K. F. Craymen, the defected commander of the Black Fleet. Taking Craymen as her master, she loyally defended him from enemies, including a mercenary named Edge. Her ultimate purpose was to activate a Tower located north of Uru, fulfilling Craymen's goal to regulate human populations by releasing bio-engineered pure-type creatures.

Azel taking control of her own destiny led to her opening the gate to Sestren, allowing the Divine Visitor to free the world from the will of the Ancients.

The name "Azel" was written on the hibernation pod where Azel was sleeping in Excavation Site #74. According to the scientists who created Azel in the Ancient Age, this was name they gave her.[1] Azel simply means "servant".[2] Either Azel or the Black Fleet adopted the name and she refers to herself by it during her conversation with Edge in Uru Underground Ruins.

Azel was created in the Ancient Age, during which the Towers themselves were being constructed. Like many drones, Azel was "born" within a genetics lab that was submerged (during the time period of Panzer Dragoon Saga) in Lake Uru. Her purpose was to mentally interface with the systems in the Tower to which the lab was physically linked; doing so would release pure-type creatures from the Tower to regulate humanity.

Azel had a dragon named Atolm created for her. The two travelled often, but the extent of their travels and any missions she was sent on remain unknown. It also remains a mystery if she was ever given a chance to fulfill her purpose by attempting to infiltrate a Tower.

At some point, Azel was stolen in an unfinished state by anti-Tower network rebels who attacked the lab. It is unclear how unfinished she was and what her nature and capabilities would have been if she was complete. Following the Ancient Age, Azel was stored within a facility located somewhere west of the Tower in Uru. She was in suspended animation, but was preserved for centuries as the outside world descended into ruin and chaos. The name "Azel", which literally means "servant", was inscribed upon the vertical "bed" where she slept for millennia.

In Imperial Year 119, the Empire made plans to excavate Azel, believing that she could grant them unmatchable power if she reactivated one of the world's dormant Towers. However, Black Fleet commander K. F. Craymen betrayed them, killed the mercenaries who guarded Azel, and forcibly removed her from her resting place. While he too wanted Azel to reactivate a Tower, his goal was to regulate populations to save mankind and nature. He was unaware of her origins, and would be the first person to name her "Azel".

The Black Fleet acquired Azel and Atolm, before later reuniting the two. Upon being revived by Craymen, Azel took him to be her new master. She was tasked with eliminating Edge, a mercenary who befriended a dragon and sought revenge for Craymen's murders at Excavation Site #74.

Azel first confronted Edge over the Forbidden Zone, an area of sea. Arwen had laid a trap for Edge and upon his defeat, he used Azel and Atolm as a last resort to defeat Edge. Edge begged Azel to stop, telling Azel that he did not want to fight her. Azel proceeded to engage in combat, telling Edge that Craymen's enemy was also her enemy. After being defeated by Edge's dragon, Azel retreated from the battle, telling Atolm that he still needed rest.

Azel later encountered Edge over the ruins of Uru. Atolm and Azel warped into view, and proceeded to attack Edge for a second time. Atolm had recovered, now protecting himself and Azel with orbs. Azel warned Edge before Atolm fired a series of lasers at Edge's dragon, a near miss. Both Atolm and the smaller dragon which Edge rode put up front facing shields, ramming into one another. Azel told Edge that if he interfered with Craymen again, she would kill him, to which Edge responded that Azel didn't know Craymen, whom he thought was insane. The shields of two dragons shattered, with both riders falling off their dragons and plunging into the ruins.

Pinned beneath a pile of fallen Ancient technology, Azel offered to help guide Edge out of the ruins in exchange for him freeing her. The two escaped on a floater, an antigravity bike, and in the process got to know one another. Azel told Edge that she protects Craymen because he was the one who woke her from hibernation. Edge offered her food, but Azel declined because she could not eat it; internally, she was closer to the creatures they had been fighting.

However, upon reaching the surface, Azel told Edge that she would still be forced to kill him if he crossed Craymen's path again. She mounted Atolm and returned to her master.

Edge ignored Azel's warning and reached the Uru Tower to confront Craymen. Azel engaged him in combat a third time. Edge tried and succeed in shooting down Atolm without hurting Azel. As Atolm fell toward the ground, Edge's dragon chased after and Azel's decent was slowed by the dragon encapsulating her in transparent green orb. Unconscious, she slowly fell into Edge's arms. Azel remained into a coma-like state and Edge brought her to his campsite, but she did not regain consciousness.

Edge and Craymen later formed an alliance against the Empire, with the former protecting the Tower while the latter revived Azel.

Azel was ultimately held at gunpoint when the Empire seized the Tower's control room. Craymen was wounded by the Seventh Emperor, while Azel was ordered to reactivate the Tower. She obeyed, screaming to release a legion of pure-type monsters that immediately killed Craymen, the Emperor, and the Imperial fleet. She fell unconscious again and was carried out of the Tower by Edge.

Revival by the Seekers

Gash, a friend of Edge and the leader of a group of Seekers, revived Azel. They believed that if she opened a gateway to Sestren from within the Uru Tower, she could destroy it and make the Towers of the world sleep forever. Presumably due to her traumatic experiences, Azel became self-aware and independent, and she also began experiencing dreams and nightmares like humans.

While Edge and the Seekers defended their stronghold from the pure-type monsters, she returned to the Uru genetics lab. This was seemingly to undergo a process which would ensure her survival following her trauma. However, she was waylaid by mutated monsters and rescued by Edge.

Despite Gash's apprehension, Azel was determined to deactivate the Tower; for the first time, she asserted her own will.

Azel and Edge rode the Heresy Dragon into the lethal maze of the Tower's inner passages. Interfacing with the Tower's systems, she informed Edge that she needed to destroy the Tower immediately after the data transformation gateway opened, thus stopping Sestren from escaping into the physical world. Edge initially protested before relenting, vowing to return to her. As he left the Tower, Azel finally admitted to herself what her human emotions had revealed to her: that she had come to love him.[note 1]

The Search for Edge

Azel successfully destroyed the Tower and survived. However, Edge never returned; determined to find him, Azel set out alone. On the rim of the endless wastelands of the world, she passed by a caravan of hunters, lead by An'jou. They did not recognize Azel for what she was, as she had disguised herself in a heavy cloak which concealed her drone aspects. Out of sympathy, the hunters provided her with a coolia to travel.

Azel ultimately did find another way into the dormant Sestren network, another data transformation gateway within a still-active ruin. She herself passed through it, desiring only to find her long lost Edge or, failing that, the truth.

The pair were destined never to be reunited, as all that remained of Edge within the Sestren network was his genetic code, possibly recorded and stored by Sestren's ceaseless monitoring systems. With no alternatives left, Azel did the only thing she could think of that would preserve some trace of him, and her.

Azel recognized that - presumably owing to her nature as an extremely advanced drone - she was capable of interfacing with the technologies required to operate an Ancient Age genetics lab. By combining her own genetic code with Edge's, Azel was able to form a template for a living being which she used one such facility to create.

Azel left a recorded message for her daughter in the depths of the Sestren network, an explanation of Orta's origins which she hoped the young drone would one day hear. In it, Azel - represented by an elegant and floating golden avatar - told Orta that she had the power to change the world. Although it is unclear whether these words simply reflected a mother's confidence, Orta did ultimately save the world from the threat that the drone Abadd posed. Only time can tell what Orta is truly capable of, however.

It is unclear why Azel could not be with Orta as she grew up, and also what Azel's ultimate fate may have been. Regardless, something of Azel lived on in Orta, and something of Edge, too; Orta fought for and successfully achieved her own freedom in the world.

Panzer Dragoon Saga director Yukio Futatsugi has stated that when creating a game, he does not want the story to focus on a fictional avatar of the player. For this reason, Panzer Dragoon Saga's story is centered on Azel, with the player, as Edge, watching her story develop and advance the plot.[3] 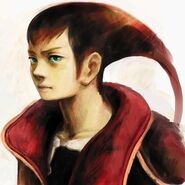 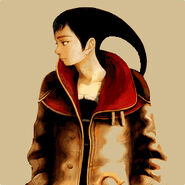