This article is a stub. You can help Panzer Dragoon Wikia by expanding it.

Dragonmares are artificially created dragons that serve as powerful steeds for the Imperial army. They are powerful enemies the player will fight several times in Panzer Dragoon Orta.

Dragonmares are far more powerful than the Empire's other steeds and vehicles, and an elite squadron of Dragonmares headed by Captain Evren was the spearhead in the Empire's raid to capture Orta. While an individual Dragonmare does not hold the power of a true dragon, the Empire was capable of breeding them by the dozen, and a squadron's combined attacks could even pose a threat to the legendary Blue Dragon.

The embryos of these beasts are stored within the Cradle, as the empire used to do research upon them In their facility. The Dragonmares went berserk as soon as the Cradle was released from the wires it was bound to. 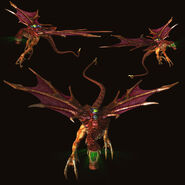 Add a photo to this gallery
Retrieved from "https://panzerdragoon.fandom.com/wiki/Dragonmare?oldid=3601"
Community content is available under CC-BY-SA unless otherwise noted.