View source
watch 01:36
We're Getting Mutants in the MCU - The Loop
Do you like this video?
Play Sound

K. F. Craymen (K. F. クレイメン, K. F. Kureimen?) was a former high-ranking member of the Imperial Academy and the commander of the Black Fleet, the most elite combat unit of the Empire. He is the primary antagonist of Panzer Dragoon Saga.

Craymen betrayed the Empire in his pursuit to save the environment and humankind, which he believed was threatened by the Empire's expansionism and misuse of the Ancient technology. He obtained a drone named Azel, planning to use her to activate a dormant Tower located north of Uru; the monolith was built by the Ancients to regulate human population with pure-type creatures.

In his pursuit for what he believed to be a good cause, Craymen killed several mercenaries who guarded Azel — save for one named Edge, who swore revenge — and bombed the Imperial Capital, igniting conflict with the Empire, who he feared would weaponize the Tower. He was ultimately killed by a pure-type creature when Azel activated the Tower.

Little is known of K. F. Craymen's past. He was a commoner, rather than a man of noble birth, in the Empire during the first century following its foundation.[2] Despite this, he gained entry to the Imperial Academy, an institution driven by the Empire’s top scientists, engineers, researchers and military minds. He rose to officer status and beyond, eventually achieving the Academy position of "Examiner", the title "Lord", and eventually a position of active leadership within the Imperial army.

Craymen ultimately became the commander of the Black Fleet, the Empire’s most elite combat unit. He put many of the Empire's enemies to death, including members of the Seekers.

Betrayal of the Empire

Craymen grew to resent the Empire for being power-hungry, destructive, and wasteful of resources. He became fascinated with the Towers, monoliths created by the Ancients to regulate mankind by producing bio-engineered pure-type creatures. This led to his belief that by taking control of a dormant Tower located north of Uru, he could save the world from annihilating itself in war.

His self-appointed mission had various challenges: the Towers had been long inactive, hidden in endless wastelands, and could not be activated without drones, bio-engineered creatures designed to mentally interface with other technologies. Craymen thus began searching for a drone.

In Imperial Year 119, at forty-seven years of age,[3] Craymen learned that the Empire located a drone at an excavation site out in the Frontier. To avoid competition, he leveled the entire Imperial Capital with a planned detonation. The Seventh Emperor, unfazed by the death and destruction, responded by pursuing Craymen into the Frontier in his flagship, Grig Orig, with much of the Imperial fleet in tow.

Zastava, one of Craymen's henchmen, slaughtered the mercenaries who protected the excavation site. Craymen informed Zastava to cease killing the mercenaries, but argued from the point of view that they didn't have much time. Craymen and the Black Fleet fled the excavation site with the drone, who was still asleep, and its ancient dragon Atolm in search of the Tower in Uru.

Craymen managed to revive the drone Azel, who took him as her new master. Azel loyally defended Craymen from threats, including Edge, a mercenary who met a dragon and sought revenge for Craymen's murders at the excavation site.

While travelling to Cainus with Edge, Gash found a message from a dead friend claiming that Craymen led the monsters which attacked Cainus. However, it is not confirmed whether this was true.

Meeting with Edge in Zoah

After Panzer Dragoon Saga's introduction, Craymen disappears from the story until disc 3. Paet was given a letter by someone who he thought looked like a hunter but was a bit odd; the letter which instructed Edge to meet by Paet's airship at night.[4] That night, Craymen met with Edge, stepping out from the shadows and expressing surprise that Edge was the dragon rider who had caused him so much trouble. Edge attempted to shoot Craymen, but was disarmed. Craymen asked Edge for his help and attempted to justify his actions at the Excavation Site. Craymen argued that it was a war and that to obtain the key element, Azel, he had to be ruthless.

Meeting with Edge at the Tower

After the Empire annihilated the village of Zoah, Craymen requested Edge to meet with him at the Tower with Azel, via another letter[5], enlisting his help out of fears that the Empire would weaponize the Tower. In his letter, Craymen argued that Azel would never regain consciousness if Edge did not return her and urged Edge to make peace with him. While unwilling to forgive Craymen for the deaths of his friends, Edge agreed because they shared a common enemy.

During their meeting in the Tower, Craymen explained to Edge how the Technology Preservation Faction had created the Towers and bio-monsters to protect the humanity from themselves in the Ancient Age, and that he saw the need to do the same for the Empire. He felt that unless a person or a system takes control of all things, humanity would continue to destroy itself. Craymen told Edge that he was humanity's only hope now, but that he didn't want Edge to do anything in particular; rather, Craymen believed that he had set the stage for Edge to choose his own destiny.

With the Empire rapidly approaching the Tower, Edge told Craymen that he hadn't forgiven him yet, but that he would settle things once he returned from fighting the Imperial Fleet. Craymen told Edge that he looked forward to his safe return.

Despite Craymen and Edge's best efforts, the Empire captured the Tower's control room and held Craymen at gunpoint. Craymen attempted to kill the Emperor with a concealed weapon, but missed, with the Emperor wounding him with a weapon of his own. The Emperor ordered Azel to activate the Tower, fulfilling Craymen's vision. An army of pure-type creatures emerged, killing both Craymen and the Emperor. Before dying, Craymen's final words to Edge were "Edge... Your destiny...". When Craymen died, Azel fell unconscious. Later, Gash referred to Craymen's death as part of Craymen's vision for the world, and that he was food for the biomonsters in the Tower ecosystem which Azel awakened.

Due to the later actions of Edge, Azel and the Seekers, every Tower in the world was forced into deactivation and perpetual slumber, preventing the plans of Craymen and others from ever coming to fruition.

Panzer Dragoon Saga director Yukio Futatsugi has stated that Craymen is his favorite character and also the character that Team Andromeda left the most unfinished. Originally a greater number of scenes were planned for Craymen, delving into his past and the reason why he rebelled against the Empire, but these scenes were cut as they would have taken up the entirety of the first disc.[6] 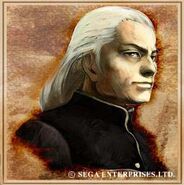 Official art of a younger Craymen.

Craymen meets with Edge in the Tower.