Kyle Fluge (カイル・フリューゲ Kairu Furyūge)[note 1] was the rider of the Blue Dragon. He is the protagonist of the 1995 video game Panzer Dragoon and its 2020 remake.

An ordinary hunter, Kyle was entrusted by the Blue Dragon's rider to stop the Prototype Dragon from reaching a certain tower. Wielding the fallen rider's pistol, Kyle rode the Blue Dragon in pursuit, coming into conflict with Imperial forces. He shared a mental, physical, and emotional bond with the dragon.

Kyle's efforts resulted in the Prototype Dragon's defeat and the tower's destruction. He survived the journey, eventually gave up his hunter lifestyle, and has not been heard of since.

While hunting with his companions in a sunburnt valley, Kyle witnessed a large battleship flying overhead; the group wondered if it was one of theirs. They were ambushed by the scorpion-like burrowers, with Kyle killing one and pursuing another on his coolia. He eventually discovered a ruin buried into the side of the valley, inside which was an Ancient Age warehouse filled with inactive or incomplete pure-type monsters.

Kyle inadvertently triggered an elevator, escaping just before his coolia was crushed to death by a giant shelled monster, which was then killed by a falling rock after an earthquake. He watched in awe as a blue dragon soared past with a black dragon in pursuit. An explosion enveloped the room, causing Kyle to fall unconscious. When he later came to, the black dragon fatally wounded the Blue Dragon's rider with a laser beam.

During his journey, Kyle battled various hostile bio-creatures and the Empire, the latter of whom was searching for the Blue Dragon. The black dragon ultimately reached the tower, transforming into a powerful super-dragon. After Kyle defeated the black dragon, the Blue Dragon vaporized the tower, protecting him in the resulting explosion via a force field. Sometime later, Kyle awoke on a sandy shore to find the Blue Dragon's footprints, revealing that it flew him to safety.

It has been claimed that Kyle gave up on his hunter lifestyle, and that he has not been seen since his journey with the Blue Dragon.[2]

"For those who know the subsequent deeds of the hunter who mounted the blue dragon (Kyle), it is clear that their(a hunter) lawlessness was deep-rooted and dangerous enough to shake the empire."[3]

The Azel: Panzer Dragoon RPG Guide Book speculates, from the Seekers' point of view, that K. F. Craymen is an older Kyle Fluge.[4] There were rumors that Craymen was a wandering hunter before joining the Imperial Academy. Craymen had an extraordinary interest in towers and dragons and the author argues that if they were the same person, then no one could be more knowledgeable about dragons and towers than Kyle.

Kyle is the protagonist of the Panzer Dragoon anime film. The Black Dragon captured his girlfriend Alita and killed his friend Devidok, and Kyle joins the Blue Dragon to save Alita and the world.

Kyle appears in the crossover Worlds Unite, where he and the Blue Dragon defeat Gigabolt Man-O-War and Burn Dinorex and help Rotor the Walrus and Bubble Man destroy the Unity Engine set in his world.

Kyle in the Panzer Dragoon OVA

Kyle in the Archie Comics 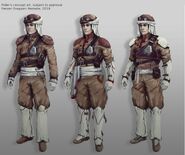