Panzer Dragoon director Yukio Futatsugi has stated that Dune was a significant inspiration for the game's world, and that the sand worms in Panzer Dragoon were inspired the novel.[2]

Panzer Dragoon is a rail shooter in which the player flies along a predefined path, shooting enemies and dodging obstacles. The only time the game pauses, thus giving the player control over how long the game lasts, is during boss battles. The player has a small degree of control, being allowed to move about the x and y-axis, but the overall direction of travel is uncontrollable.

The player has a full, 360-degree field of view, and can quickly look left, right, forward, and behind the dragon. Enemies will come from all directions and vary in size and health.

The player has two weapons, the hand gun held by the rider which can fired with a single button press, and the homing laser fired by the dragon which is controlled by holding down the fire button and highlighting enemies with the aiming reticle.

The game is set out over six levels and a final boss battle. Bosses are encountered at the end of each level, with the exception of the sixth. Cut scenes illustrating plot details are placed before the beginnings of some levels.

Long before the events of Panzer Dragoon took place, the planet was reduced to a wasteland by wars fought with terrible destructive technologies. Thousands of years later, the survivors are forced to live in a barren world overrun by monsters of all shapes and sizes: creatures that are the genetically engineered weapons of the distant past. The ruins of the “Ancient Age” still litter the landscape, holding within them the keys to the god-like technologies of old.

Eventually, a human civilization emerged that began to exploit these forgotten technologies. With fleets of flying battleships constructed from Ancient antigravity engines, this civilization spread across the face of the world with an iron fist; it came to be known only as “the Empire”.

In time, the Empire discovered one of the ultimate monuments of the Ancient Age: an immense structure known as the Tower, which housed unimaginable potential for destruction. However, as the Imperials set about trying to breathe life into the Ancient monolith so that they can use it for their own ends, a mysterious dragon emerged from the shadows of the past to ensure that the Tower was never revived.

"Thousands of years have passed since a once thriving human civilization perished in the dust.

Time goes by...... Passing their existence in fear of the ever-present shadow of cyber-genetic warfare, the few remaining human beings struggle to regain the power that they have lost.

With a desolate future, the people look to their past for a glint of hope. Excavations at an ancient tower have provided the people with a deadly arsenal, now turned upon their foes. This power has created strife amongst surrounding nations, all struggling against each other and the evil forces of the Dark Dragon.

The fate of the world rests on the wings of an armored blue dragon..."

The game opens at night, with a large, flying battleship approaching a tower surrounded by water. An announcement about the starting of an operation is heard over loud speakers.

The scene cuts to a group of three humans, riding bipedal reptile-like creatures called coolias and hunting in a canyon during the day. The protagonist, Kyle Fluge (unnamed in the American version), is among them. A similar ship as seen earlier flies overhead. They are given little time to question the ship's origin or allegiance before they are attacked by two crab-like attack organisms called burrowers from under the dirt. His companions surprised, Kyle gives chase, killing one.

The second creature escapes into what appears to be a large, ancient complex built directly into the rock. Kyle pauses, but ultimately continues inside. The complex is covered with dust and age, but relics of old technology still hang from the ceilings. The burrower he had been chasing suddenly drops from the ceiling, ripped in two, followed by energy blasts.

Kyle looks up and sees a gigantic creature falling from the ceiling towards him. He leaps from his mount just in time to evade the beast, which crushes his coolia. He flees, only to come to a dead end. His crossbow is useless against the armored creature, but a rumbling triggers a cave in, crushing the monster and saving Kyle.

From the newly-created hole, an armored, Blue Dragon flies down the cavern with a rider across its shoulders, being chased by an even bigger black dragon. Kyle is unable to gather his senses before the blue dragon is seen rushing back up the cavern, followed by the shock wave of a large explosion.

Regaining consciousness outside, Kyle sees the two dragons locked in combat in the air before him. Dodging a blast from the black dragon, the blue dragon's rider does not see a single shot coming at him, which pierces his chest. The black dragon and rider fly away into the distance.

The blue dragon flies towards Kyle. Upon landing, the dragon rider, visibly wounded, extends a quivering hand towards Kyle. Kyle reaches out and a psychic connection is made. The rider tells Kyle that the black dragon must not be allowed to reach the tower shown at the beginning of the opening cutscene. With this, the rider's life force leaves his body and blows into the wind. The dragon cries out as if it was mouring the fallen rider. Kyle looks the dragon in the eye, picks up the rider's fallen gun, climbs atop the dragon and flies away, determined to finish the rider's quest. While leaving, Kyle sees his two companions below.

The two fly through a drowned city, encountering mutated creatures who mistake them as a threat. After escaping the creatures in the initial area, Kyle and the dragon encounter a small, Imperial patrol ship which was endangering the monsters in the area. The ship is quickly dispatched, but not before it was able to send a report to a large fleet of ships flying above the clouds. It is revealed that the imperial forces are specifically searching for the blue dragon.

Kyle and the dragon travel great distances, they traverse through a desert, where they encounter mutant creatures and gigantic worms. At the stormy edge of the desert, they are soon confronted by the Prototype Dragon, which challenges them to a duel. The duo scare off the other dragon, and it speeds away.

The two soon fly through a mountainous landscape at nighttime where they get reacquainted with the Imperial forces. It seems that The Empire has set up an excavation site, exploring ancient ruins. While here, they also encounter a variety of Imperial battleships, Imperial turret mechanisms, and even Imperial ground infantry units. They fight the Prototype Imperial Assault Ship before finishing the level.

Through these encounters, the ongoing conflict between the Imperial forces and the ancient machines and creatures is illustrated. Kyle and the dragon traverse an ancient facility while being pursued by Imperial airships. The Imperials were not the only threat that the duo had to deal with; they soon encounter "pure-type creatures", cybernetic sentinels left behind by the ancients. Soon after they defeat a large armada of the most powerful Imperial ships over a forested area, the game cuts to the Tower once more. It is announced that instructions from Unit 01 have been received, and the entire fleet is to mobilize.

A group of water-skimming pure-type creatures erupts from the surrounding ocean and fires on the flying ships circling the tower, destroying them. A fleet of dragon-esque pure-type creatures called glide dragons are then shown to be attacking the Imperial forces. The chase reaches its zenith, here, as the black dragon and Kyle race through the battle-scarred Imperial capital. During this, they are both waylaid by the creatures and machines seen attacking the Imperial fleet around the Tower while also being fired on by Imperial defenses.

With the battles behind them, Kyle and the dragon enter the Tower. While traveling down a long corridor, the dragon looks up at Kyle and surrounds him in a force field, lifting him from the saddle and suspending him in the hallway. Kyle watches as the dragon continues on to the core of the Tower. A blinding light is seen, illuminating the silhouette of the blue dragon, and the Tower explodes. Kyle wakes up some time later in a desert area abutting the ocean. Looking down, he sees the footprints of the Blue Dragon around him, indicating that after the explosion, the dragon carried him to safety and flew away.

The NTSC-J version of Panzer Dragoon. While most Japanese Saturn games have the front insert of their case doubling as an instruction manual, Panzer Dragoon comes with its instructions printed on one side of a fold-out poster; the other side features artwork of Kyle and the Blue Dragon.

The artwork on the Japanese packaging was created by a French artist named Jean Giraud, who is also known as Moebius.

The NTSC version of Panzer Dragoon. The NTSC packaging doesn’t have the real Panzer Dragoon logo on it: it simply has the words “Panzer Dragoon” written in the Hoffmann font, colored gold and with a shadow effect added.

The PAL version of Panzer Dragoon. 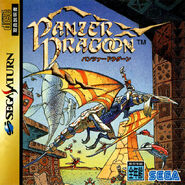 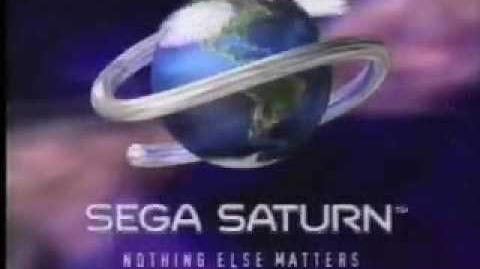 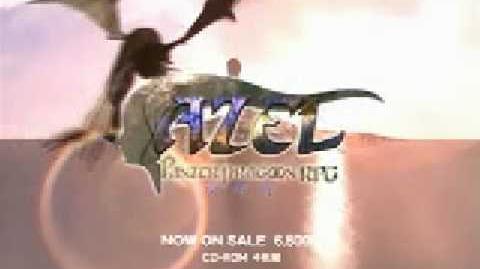